"President Mahmoud 'Abbas took a step back in his address to the UN Security Council, sticking to his old approach, even though it leads to a dead end by his own admission," says Palestinian commentator Hani al-Masri on the independent Palestinian news-portal www.masarat.ps.

He did not follow through on his threat to adopt a new approach; he went to the Security Council with a small delegation as usual, despite the gravity of the phase, especially after Trump has rolled out his vision seeking to liquidate the Palestinian cause. The delegation did not even represent the various PLO factions, not to mention the other factions outside it, the various popular sectors, or even the families and children of the martyred and wounded.

He was content to reiterate his rejection of the Trump/Netanyahu deal, without specifying his demands to the Security Council or his plan for dealing with this toxic deal. Even worse, he did not repeat his words about handing the PA's keys over to the [Israeli] occupation or changing its functions or ending the PA's commitments such as security coordination, despite the contradiction between his words. Nor did he touch on national [Fatah/Hamas] unity although it is the essential rule for steadfastness and victory.

Instead, he gave a weak address in which he came off as a supplicant ('To whom shall I complain'... 'even if they are disputed territories'.... 'Israeli officers who have fought for their country'... 'Rabin, May God rest his soul'). He pledged to stick to the negotiations, but via an international conference this time rather than unilateral U.S. sponsorship, unaware that this has become far-fetched if not impossible. It will take a persistent, multifaceted struggle to change the balance of power so as to impose the Palestinian solution with or without an international framework.

His demand for an international conference contradicts the manner in which he continues to cling to the Oslo Accord's coat-tails, and the possibility of achieving a state via bilateral negotiations ('leave us [Palestinians and Israelis] to negotiate among ourselves'). He talks as if he were a star-struck lover flirting with a lady in the hope of winning her impossible affections, failing to recognize that he is the root of all woes. He openly continues his search for an Israeli partner for peace, to the extent of expressing his willingness to stay in New York should he find someone to negotiate with. He says there is an opportunity to achieve peace (we do not know how or with whom, since the prevailing Israeli currents are competing over who takes the stronger hardline against the Palestinians and who is better equipped to implement Trump's vision) and will continue to fight 'terrorism and violence' in all its forms, without explaining exactly what 'terrorism' he speaks of, saying he is determined to increase the [PA's] 83 security agreements with other countries to 133.

President 'Abbas's meeting with Ehud Olmert may be the benchmark for a ceiling that he will not breach, based on the delusion that it is possible to change Israel from within. But he overlooks the fact that the Israelis benefit from a system of racial discrimination, rendering change imposed from outside the main possibility for defeating the Zionist project. Olmert, who was recently released from prison after being convicted of corruption, is not involved in political life. Nobody remembers him, but the meeting brought him back out of obscurity – he who waged an [2008] assault on Gaza – to  demand Abbas's support, because he alone – or so he says – can help to implement Trump' deal!

'Abbas also encourages and gives cover for [Palestinian/Israeli] normalization summits, such as those recently held in Tel Aviv and Ramallah with figures from the declining Zionist left – most of them retired or irrelevant – and it is not true that they all support ending the occupation and the establishment of a state on the 1967 borders. In fact, most do not agree to that. Some have said that the Palestinian national movement is dead and Clinton's [December 2000] plan was the best opportunity that the Palestinians had and will ever have, if they had only not  lacked the courage to accept it (such as [former Israeli FM] Shlomo Ben-Ami). Others reneged on supporting the two-state solution (former Labor Party MK] Yossi Yona), while still others support annexing the larger settlements and oppose annexing the smaller ones ([former minister] Opher Pines).

Meetings with these Israelis pose a danger because they come a time when U.S./Israeli committees are drawing the map to annex the Jordan Valley and Israel's colonial settlements. The Palestinian leadership has not learned its lesson from the bitter fruist of betting on the so-called peace process, making concessions, showing good will, and endlessly pursuing negotiations. These meetings pose an even greater danger because they are used as a bridge to Arab normalization. If the Palestinians can normalize relations, why would the Arabs hold back? The outraged public response to these meetings, (despite the fact that some have described the participants as traitors), proves that the people are still present and vigilant, and that the normalizers better think twice, as they should act as mere foot soldiers who obey any command from the leadership.

The foregoing calls for a review of the PA's Contact [with Israelis] Committee, its foundational principles, and the terms for communicating with the Israelis. There has been no peace camp in Israel since the committee was formed, and most of its meetings have been with marginal figures peddling delusions by covering up Israel's nature and character with claims that it can change.

How can we explain what happened?

The Palestinian leadership still believes in endlessly pursuing the negotiating track and continuing with its losing wagers on others, and on the Israeli elections in the hope that it will bring Kahol Lavan led by Benny Gantz to power (even though he and his camp are not much different from Netanyahu and his camp), and on the U.S. elections in the hope that Donald Trump will lose and a Democratic president will replace him (although polls indicate this is unlikely), or even wagering that the deep [U.S.] state will 'not allow' Trump to support Israel by annexing the Jordan Valley and colonial settlements without international agreement and the Palestinians' participation.

This habit of repeating the past can be accounted for by an unwillingness to face what has happened, although the signs were clearly visible, as well as a recognition on the part of 'Abbas and those with sway over decisions that doing what must be done (changing course, withdrawing recognition of Israel, ending security coordination, and seriously limiting our economic dependency) will cost the PA its main sources of survival and legitimacy, as it no longer derives its legitimacy from the people. It has been 14 years since PA's Legislative Council elections were held and 15 years since the last presidential elections.

Nor does it derive its legitimacy from the resistance, as they ['Abbas and his supporters] believe that 'armed resistance is what has destroyed us, and we suffered an undeniable defeat in the second intifada', which is why the national resolutions taken on the matter [resistance] have not been implemented. Talk of popular resistance is simply for public consumption as evident when no resources are placed at its disposal, nor any real plan been formed to consolidate it.

What is to be done?

We need a comprehensive change in vision and strategy, a strong will to rebuild the PLO institutions on nationalist/patriotic grounds, a true partnership to represent the entire Palestinian people in word and deed, and a radical change in the PA's form, nature, functions, obligations, and budget, such as transferring its political tasks to the PLO, reducing the security budget, dissolving some security sectors, and changing the [PA's] security doctrine.

We must also stop wagering that president and the leadership will effect change, as they are impotent and decrepit and only respond to political and popular pressure. They cannot bring about even the minimal change required, and are incapable of doing so even if they wanted to. They act as if the most they can do is to reject Trump's deal, and that any new move would be tantamount to sheer political suicide. This means that we must search for new methods to procure instruments of pressure and change. As for the other [Palestinian political] forces, they stand helpless and wait for the president to act, content to hold onto whatever gains they have (such as Hamas's control over the Gaza Strip) while putting all the blame on 'Abbas. But as the Qur'an says, 'God will suffice for the believers in their fight'.

"There is an urgent need to move totally beyond a reactive strategy and adopt an effective proactive strategy that addresses the current challenges and strides towards the future, as well as to find new tools, plans, and people, ready to struggle to impose the people's will and their interests by setting an example, proposing a realistic national alternative capable of enacting change – without making excuses for the status quo, or any form of preaching that ignores it," concludes Masri. 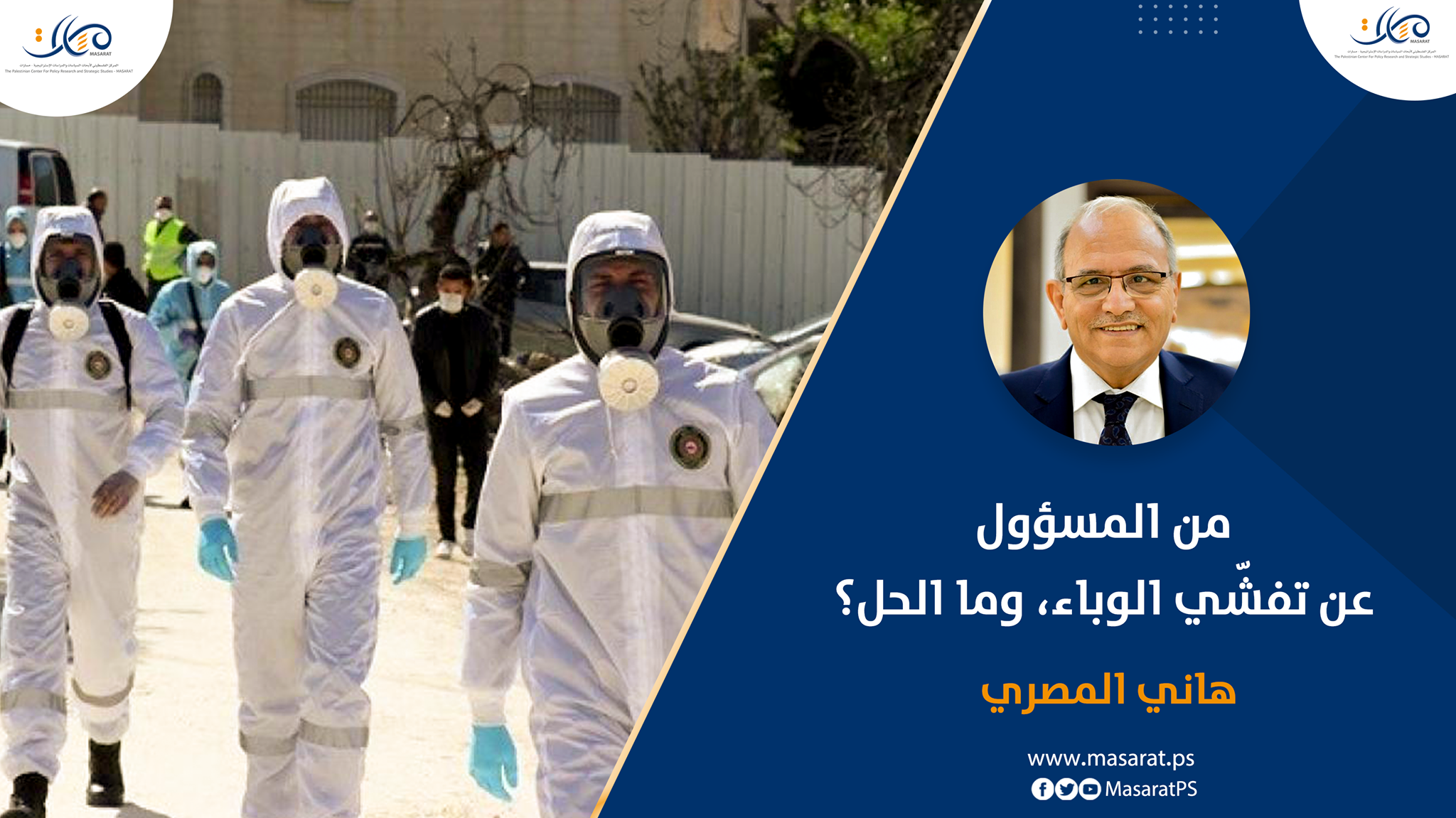