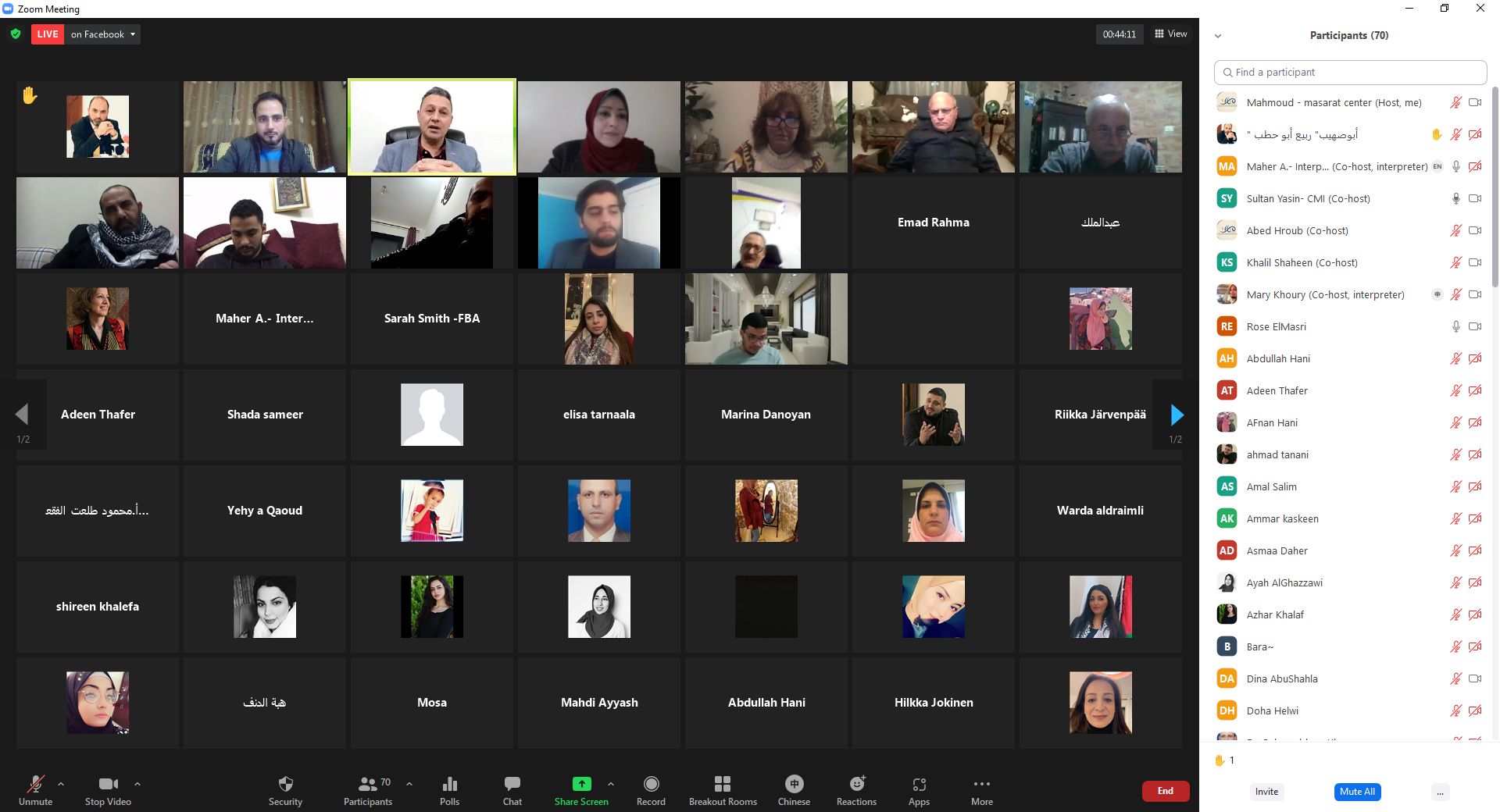 Calls for the formation of Lobbying Youth and Feminist body

Some have called for the formation of a unified youth and women’s platform to push forward the role of the youth and women in the political sphere on the various levels, while some have pointed out the need to establish a parallel dialogue (shadow dialogue) on ending the division and achieving unity, in which the youth and women should take part in, and should revert to new definitions to promote the national unity and its requirements. On the other hand, others have called on the formation of a mobilizing youth body, that can project aspirations rather than keep beseeching.

They have accentuated the importance of increasing the proportion of women’s representation in committees, senior leading positions and decision-making structures, and political parties, in a qualitative manner rather than in a quantitative manner, i.e.; numbers only. In addition to the importance of the rise of a new generation of young people in political life through holding periodic elections, after the introduction of an amendment to the electoral law, which includes lowering the age of candidacy.

Speakers in this session were: Rose Al-Masri, a feminist activist, and Elayyan Sawafta, a youth activist. Sultan Yassin, advisor to the Martti Ahtisaari Peace Foundation (CMA) in Palestine, was the moderator of the session.

Yassin said that the objective of this session is to come up with visions, mechanisms and recommendations that should contribute into creating a sustainable agenda, leading to active participation of youth and women, and respects the national agenda and international commitments and resolutions; particularly Security Council Resolution 1325 on women peace and security, and Resolution 2250 on the participation of the youth in the efforts towards achieving peace and security.

He added: Visions are supposed to answer questions like: How can we succeed in acquiring women’s and youth’s visions with regard to ending the division, the occupation and attaining the national liberation? How can we establish the institutional and organizational environment that motivates the participation of women and youth, and supports their initiatives? And how do we come up with an agenda that reflects the nitty gritty needs and priorities of the youth and women and sees them as a primacy, in the various communities in which Palestinian people exist; the West Bank, Gaza Strip, the 1948 lands and the Diaspora?

In her speech, Al-Masri referred to the absence of women from the different sessions of dialogues that took place between the different political parties. In the reconciliation agreement in 2011, only 5 women were engaged in that process, while only 3 women representatives of their parties attended the last dialogue meeting that was held before the elections that were supposed to take place in May 2021. She said: “The absence of women from the reconciliation dialogue tables led to absenting their standpoints, concerns and visions in terms of ending the division, which is the same pattern and political approach adopted by the Palestinian leadership, specifically leaders of the parties.

She also noted the limited participation of women in decision-making positions in terms of numbers, as women represent only 5% of the members of the PLO's Central Council, 11% of the National Council’s members, 13% of the Council of Ministers’ members and 11% of the diplomatic corps. In addition, only one woman holds the position of a governor out of 16, and no female mayor is filling this position in any municipality in areas (A) and (B).

She recommended increasing the percentage of women’s representation in the different structures, senior leadership and decision-making positions, urged to focus on quality rather than quantity and promote the positive discrimination between genders, thus confirming the approved quota percentage in the internal systems of parties, based on the commitment to work in accordance with international conventions, laws and charters that preserve and protect women’s rights; like CEDAW, Resolution 1325, the Declaration of Independence, and the decisions of the PLO's National and Central Councils to secure a minimum 30% of the seats for women’s representation.

She encouraged investing in the leadership skills of partisan women, while aligning the implementation of the national laws and legislations with the relevant international conventions and charters ratified by the State of Palestine. She noted the importance of linking between both resolutions; 1325 and 2250, as they address similar issues on youth, peace and security, engaging women in dialogues and drafting the national plan, raising gender sensitivity in all political parties’ programmes and activities. On the other hand, she emphasized that attention should be given to the periodicity of elections as stipulated in the parties’ bylaws, with the guarantee of running for two terms only for the leadership structures, allocating a financial proportion of the party’s budget for women’s empowerment within the party, hence, encouraging their participation in the parties’ policy-making.

He explained that any factional consensus map that could lead to reconciliation and then elections, or elections then reconciliation, must include developmental leverages regarding the role of youth in contexts of war (settler colonialism) and political conflict (the division) as embodied in Resolution 2250.

Sawafta touched upon four leverages: Participation in decision-making through the holding of general elections, diplomatic representation, reintroduction of the youth within the context of factions, parties, and civil society organizations, and the partnership with the government, i.e. a vertical and horizontal partnership between the Palestinian youth and the government by means of good governance and good citizenship; protecting the youth from the dilemmas and repercussions of the Palestinian reality, most of which are destructive repercussions of the values that are usually performed by the hierarchy of the political power against the society’s base. All these mishaps are due to the long division, the consolidation of subsidiary identities, the absence of the national liberation collective concern, and most importantly, the erosion of the collective values; and the prevention, intended to promote values ​​and cultures that aim at conducting dialogues at the level of political conflict between the Palestinian parties.

The participants in this session raised some ideas, opinions and questions, such as: enacting a law that guarantees the participation of the youth and women in the political and social life, promoting gender sensitivity in education and media, endorsing youth and women’s issues in digital media, and raising a new, conscious, non-patriarchal generation that respects women and believes in the importance of their role, input and access to decision-making positions. In parallel, they proposed establishing a youth’s council or coalition that includes both genders to press for the holding of elections at all levels, revive the role of the General Union of Palestinian Students, and find practical solutions to the youth’s unemployment.

Some others also called for pushing towards making a change in the political and economic systems, while granting more space to the youth in all spheres and within the different organizations, releasing freedoms and allowing everyone to work freely, enhancing accountability, activating the role of institutions, unions, and civil society of all kinds, merely to defend the rights of the youth, and to raise the state of rebellion against corruption. 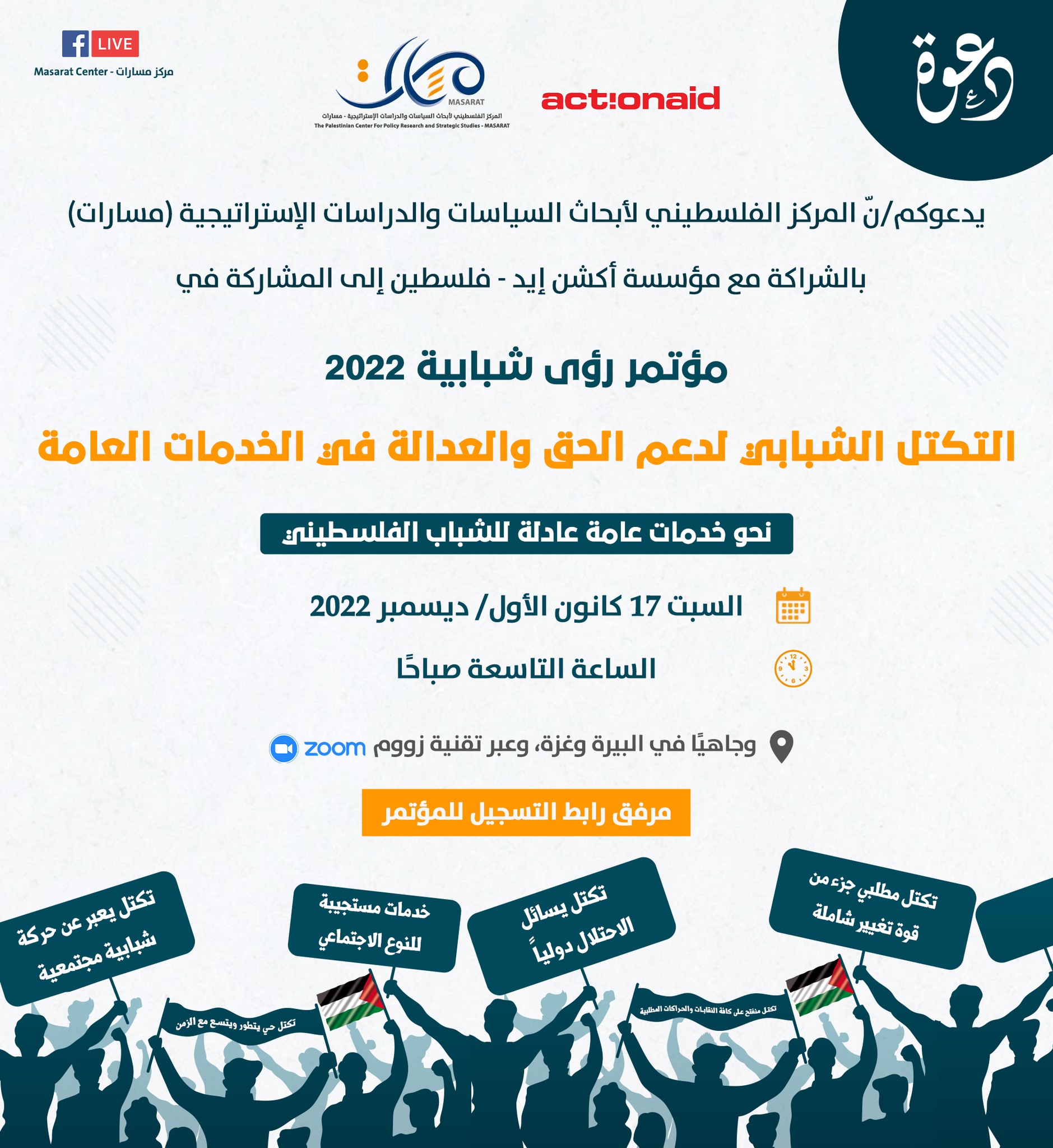