Amidst modest promises and even lower expectations, president Mahmoud Abbas will make his annual speech at the UN General Assembly, with one eye on the need to uphold his courageous position rejecting Trump’s deal, and the other eye on ways of abandoning that position because he fears its consequences. This means that the possibility of a meeting between Abbas and Trump exists, opening the way for a further deterioration in the Palestinian situation.

President Abbas has announced that immediately upon his return, he will call for a PLO Central Committee meeting to take the required decisions, although most of those decisions have already been taken during the last Central Committee and Palestine National Council (PNC) meetings, and have been referred from one institution to another during the past few years. This reflects a policy that is in holding mode, and that is not intended to build on the rejection of the Trump deal in a manner that would meet the requirements for foiling it.

The reason is that the leadership’s policy remains based on embracing the Oslo process, and the so-called “peace process”, as is evident in president Abbas’s most recent statements, particularly since his meeting with French president Emmanuel Macron, and the initiative that president Abbas submitted to the UN Security Council in February, which he is expected to re-emphasise.

However, it is not possible to enjoy both summer and winter at the same time. A choice must be made between leaving the path that has brought us to the current catastrophe that we are experiencing, or continuing to pursue the Oslo process under a ceiling that is getting progressively lower.

No one believes that a collective Palestinian institution exists that is capable of taking the required decisions, or of implementing decisions that have been taken, because the process of marginalising the PLO’s institutions is continuing. That process has actually deepened, as was evident in the meetings of the PNC and the Central Committee amidst a widespread boycott. This has turned the PLO into a one-party institution, weakening its legitimacy as the sole legitimate representative of the Palestinian people.

There is no doubt that president Abbas and the various Palestinian political forces face a comprehensive predicament, for which they are responsible to varying degrees, according to their powers and legitimate authority. In the meantime, Israeli occupation becomes ever more strongly rooted, the West Bank becomes more physically fragmented, Gaza remains under siege, the potential for Palestinian disunity to turn into a separation between the West Bank and Gaza grows stronger, Israeli settlement activity becomes much more widespread and support in Israel for establishing “Greater Israel” is growing.

The current predicament is exacerbated by what is being said about the “Trump deal” in Palestinian circles. Some say that it is already being implemented without being officially announced, with Saeb Erekat going as far as saying that 70% of it has already been implemented. Other leaders say the deal has failed because of Palestinian rejection, with some going as far as saying that it was still-born. And a third group suggests that the deal is negotiable and can be changed.

The predicament is further exacerbated by the weak response to Israel’s racist “nation state law”, which threatens to consecrate and legitimise all the racist measures, policies and laws that Israel has implemented to date since its establishment. That law lays the ground for a more dangerous phase, in which Israel will move from managing the conflict to seeking to resolve it in a manner that fulfils its conditions, interests and goals without fulfilling the most minimal Palestinian rights.

Drunkenness has given way to sobriety. President Abbas’s spokesmen have not threatened that he will give a radical speech that will shake the Middle East, or that he will shock the UN either in tone or in substance, although they did so on the eve of previous speeches. This means that he will not escalate his stand against the US administration, but will actually de-escalate it. He told the PLO Executive Committee that there is a need for de-escalation with the Trump administration to avoid an intensification of its vicious battle against the Palestinian people, their rights and their institutions, even if the administration continues to disagree with the Palestinian leadership.

President Abbas will also pursue de-escalation with Israel, because he cannot fight on two fronts simultaneously, although it is an illusion that they ever were two fronts. At present, they are more of a single front than ever before.

Even more dangerously, some are suggesting to president Abbas that not only should he de-escalate with the Trump administration, but that he should seek to resume political relations with it – following the example of security ties, which have not been severed. Their argument for making this suggestion is that the Trump administration has still not presented the deal, that it might present a deal that is negotiable, that it has done all that it can against the Palestinians and will not do more and that, as Trump himself said, the Trump administration would pressure Israel, which would have to pay a high price.

There are those who repeat the arguments they made when Trump was elected: that one must see the half full glass, rather than the half empty glass; that Trump has come from outside the conventional political system and is not in need of  financing for his election campaigns and that since his behaviour is unpredictable – as it was in the case of North Korea and its leader, he may actually shift towards pressuring Israel. They also hang onto illusions and repeat the statements of Trump and his state department that Trump did not define the borders of Jerusalem, and left negotiating them and other issues to the two sides concerned.

However, those who put forward such arguments are overlooking many of Trump’s actual actions, which indicate that he fully supports an Israeli solution, rather than arriving at one that can be agreed.

Those actions include shutting down the PLO office in Washington, recognising Jerusalem as Israel’s capital and moving the US embassy to the city, stating that Jerusalem is off the negotiating table and intensifying efforts to liquidate the issue of refugees by halting US support for the UN Relief and Works Agency for Palestinian Refugees (UNRWA), seeking to disband UNRWA and changing the definition of a refugees by limiting it to those who were born in Palestine. He has also halted aid to the Palestinian Authority.

Trump has also legitimised Israeli settlement activity by saying it is not an obstacle to peace, and he has abandoned the goal of establishing a Palestinian state, although that goal had been adopted by his two predecessors – George Bush Junior and Barack Obama. More importantly, Trump has adopted the Zionist’s historical narrative of the conflict, recognising the so-called right of the Jewish people to establish a state on the Promised Land. This provides encouragement for everything Israel does and is preparing to do.

All those who advocate the need to change the Palestinian position on the Trump deal on the grounds that the time for seeing results is coming – based on Trump’s talk about the high price that Israel will have to pay – are deliberately ignoring one very basic fact. Trump’s electoral base, which still supports him, comprises Christian Zionists who are more hard-line than the Zionist lobby that has historically supported Israel. They will not forgive Trump if he demands a very high price of Israel. The most that Trump can therefore offer is to call for a Palestinian-Jordanian confederation, that might include Israel as well. However, it would not be a genuine confederation, because a confederation is established between states, rather than between a state and an autonomy comprising heavily populated and isolated centres. The confederation proposal is a deceit that is aimed at overcoming differences over borders, Jerusalem and other issues and making Israeli settlement activity acceptable and open-ended.

This context explains the lack of a concerned reaction by the extremists in the US and within and outside the Israel government to Trump’s claim that Israel will have to pay a heavy price.

The goal should not be President Abbas’s speech itself. The speech must be considered as a means to an end. For that to be the case, essential steps should have been taken beforehand, indicating a genuine intention to follow a course that is the very opposite of the Oslo process, which was pursuing a negotiated settlement that was impossible to achieve. The conflict is taking place here in Palestine, and its echoes are heard at the UN, not the other way around. As long as the Palestinians are disunited and preoccupied with an internal conflict over authority, leadership, representation, a partial truce or preventing such a truce, President Abbas’s speech will not have the desired effect.

The impact of that speech would have been immeasurably stronger had he gone to New York armed with a comprehensive vision on the basis of a new strategy, or had he announced his intention to achieve this immediately upon his return, instead of threatening new and unwarranted sanctions against Gaza and retaliation against Hamas.

Unity on a nationalist, democratic and consensual basis, and a genuine partnership that is based on the interests of the people and that caters to the interests of the various factions is the way to regain the people’s lost trust in the president and the Palestinian leadership. The cost of unity, however high, will be lower than the costs we have paid and will pay for other choices. 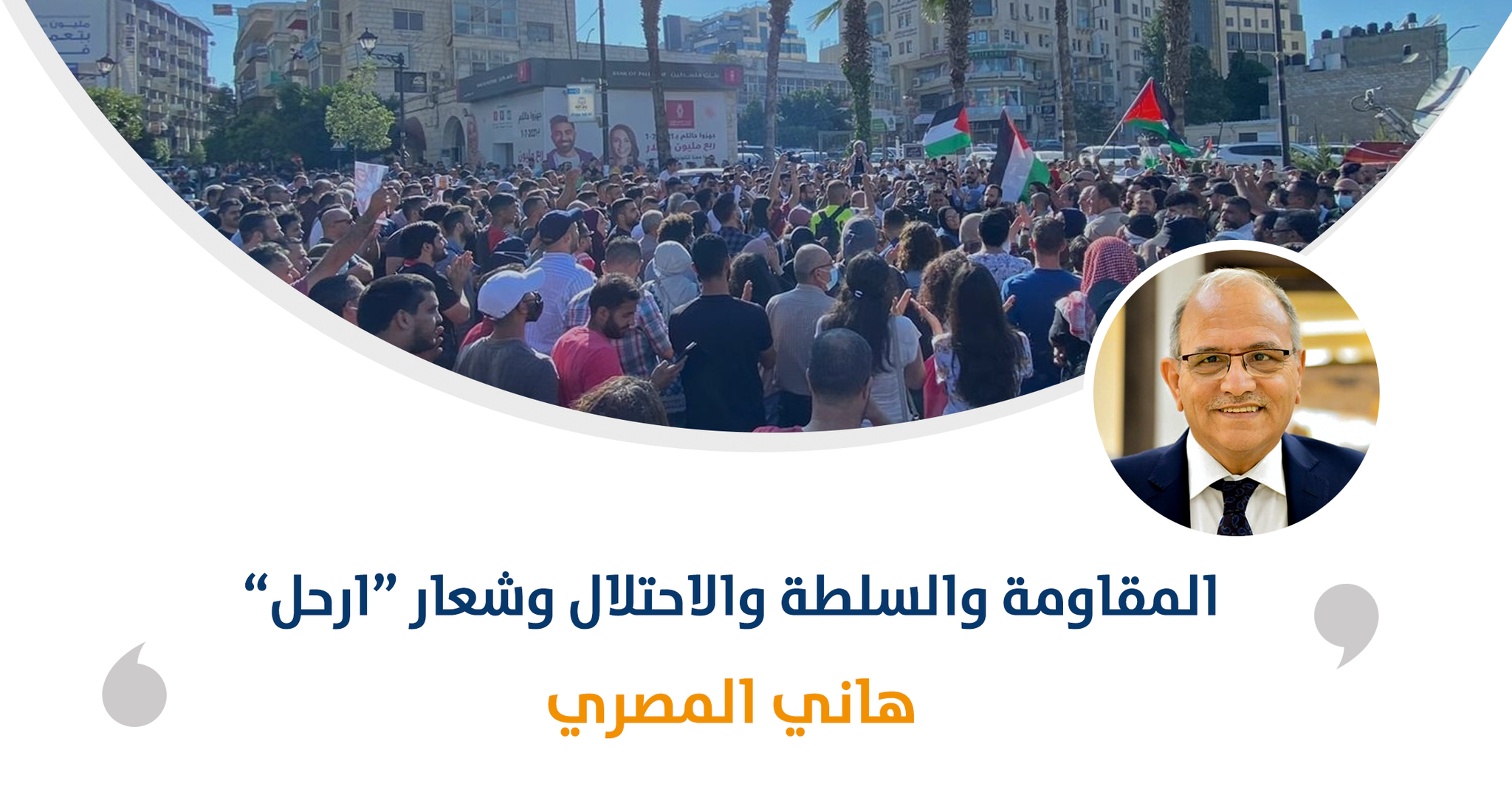